[Press Release] 1,056 LGBTQs in South Korea filed complaints to the Civil Rights Commission for recognition of rights for same-sex couples

1,056 LGBTQs in South Korea filed complaints to the Civil Rights Commission for recognition of rights for same-sex couples 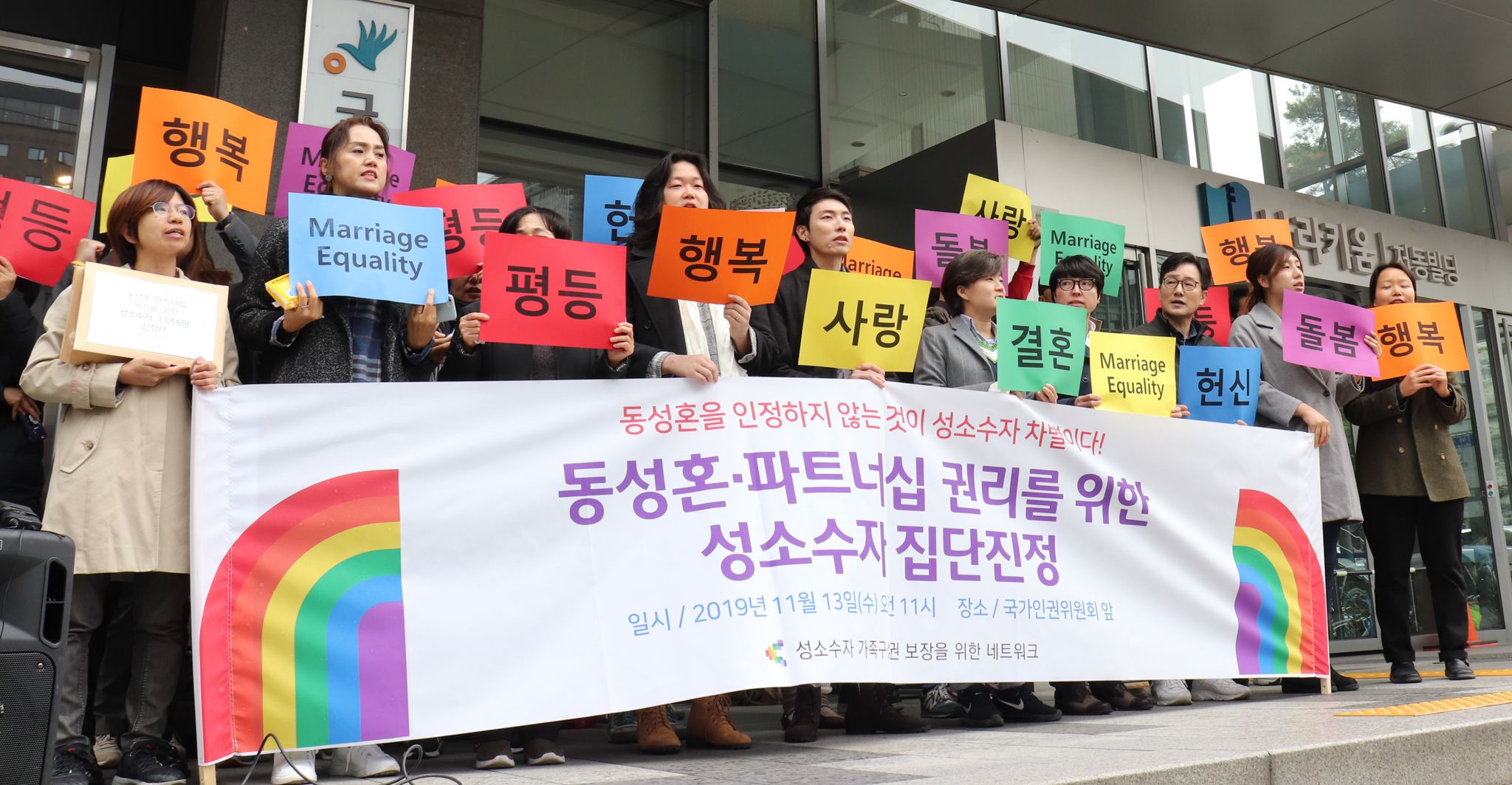 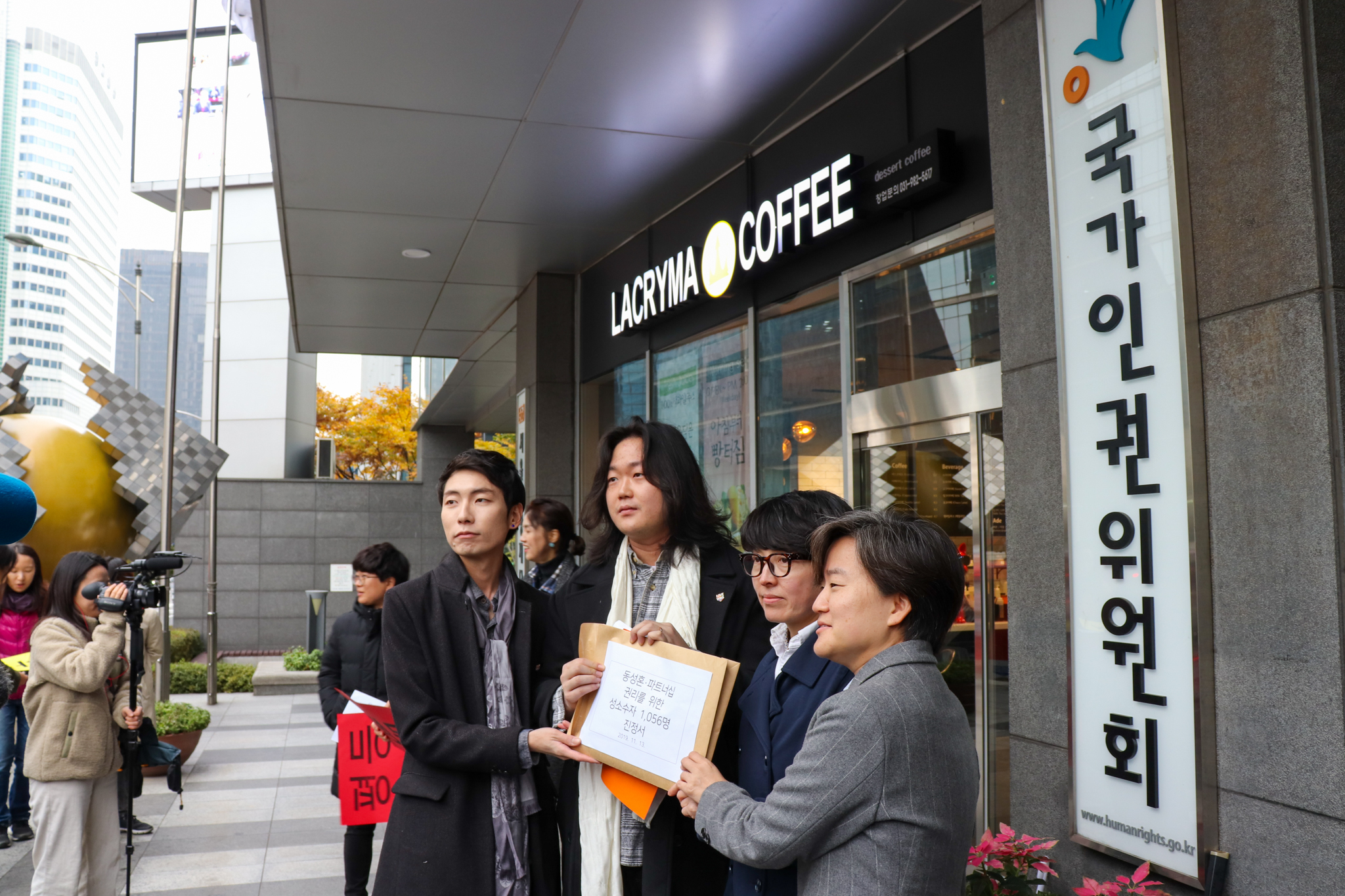 (Seoul, Nov 13, 2019) – 1,056 LGBTQs in South Korea filed mass complaints to the National Human Rights Commission of Korea (NHRCK) for recognition of rights for same-sex couples in a press conference in Seoul, Korea.

On Nov 13, Gagoonet, an LGBTQ rights group for recognition of same-sex couples rights, held a press conference demanding LGBTQ’s same-sex marriage and partnership rights in front of the National Human Rights Commission of Korea in Seoul. The mass complaints with 1,056 petitioners argued that “Korean same-sex couples are not guaranteed the rights of marriage and family life, which are the basic rights guaranteed by the Constitution of Korea. Because of the lack of recognition, same-sex couples in Korea suffer from an infringement of economic and social rights, including social security, access to healthcare and housing, and workplace benefits.”

The group also argued that the situation in Korea, where neither the central government nor local governments grant any public recognition to same-sex couples, violates international human rights law.

Respondents in complaints are the President, the Prime minister, the heads of ministries, the chairperson of the National Assembly and the heads of the local governments. The group urged to adopt gender-neutral marriage law and to improve policies relate to the healthcare, pension, housing, and workplace benefits to include same-sex couples.

The complaints reveal the difficulties that same-sex couples face in many aspects of their lives, such as social security, access to healthcare and housing, and legal matters when their spouses or partners are sick or die. Some of the petitioners share their own stories like below.

“Three years have passed since I have been with her, and we are thinking about getting married and thinking about the future. However, I feel frustrated every time because it is impossible in Korea. After seeing the story of an old unmarried couple who could not hold a funeral for their loved one, we thought about each other. Maybe we’re going to be like that in the end. Even though we are virtually partners and companions, we may not be able to hold a funeral for the death of the other because of the lack of legal linkages.”

“I’m a gay man in my 30s in a relationship with my partner for 10 years. In my mid-20s, I met my partner who clicks so well with me and we’ve been together without any quarrels. Though our relationship is happy and peaceful, there’s no legal protection for our rights as each other’s spouse. It felt like I was facing a wall when I realize that I don’t have a right to consent for the surgery of my partner in emergencies. Recognition of same-sex marriage or partnership is needed to provide a safety net for same-sex couples as well as to reduce discrimination against LGBTQ people.

“We are a lesbian couple in a 7-year long relationship. Though both of us are public officials, We cannot get not only family benefits but also paid leave for each other’s family events which married couples and families have. We are not entitled to receive inheritance or survivor’s pension when one of us passes away.”

According to a survey of 380 LGBTQ individuals living with their same-sex partner, same-sex couples are left out in social protections, including government housing policy, workplace benefits, and national health insurance. It is also reported that among 42.1% of respondents who had experiences of hospitalization of themselves or their partners, 81.8% reported that they denied rights as a partner at hospitals, including rights to make consent for surgery of the partner (56.9%), rights to make medical decision for the partner (13.6%) and visitation rights (13.0%). 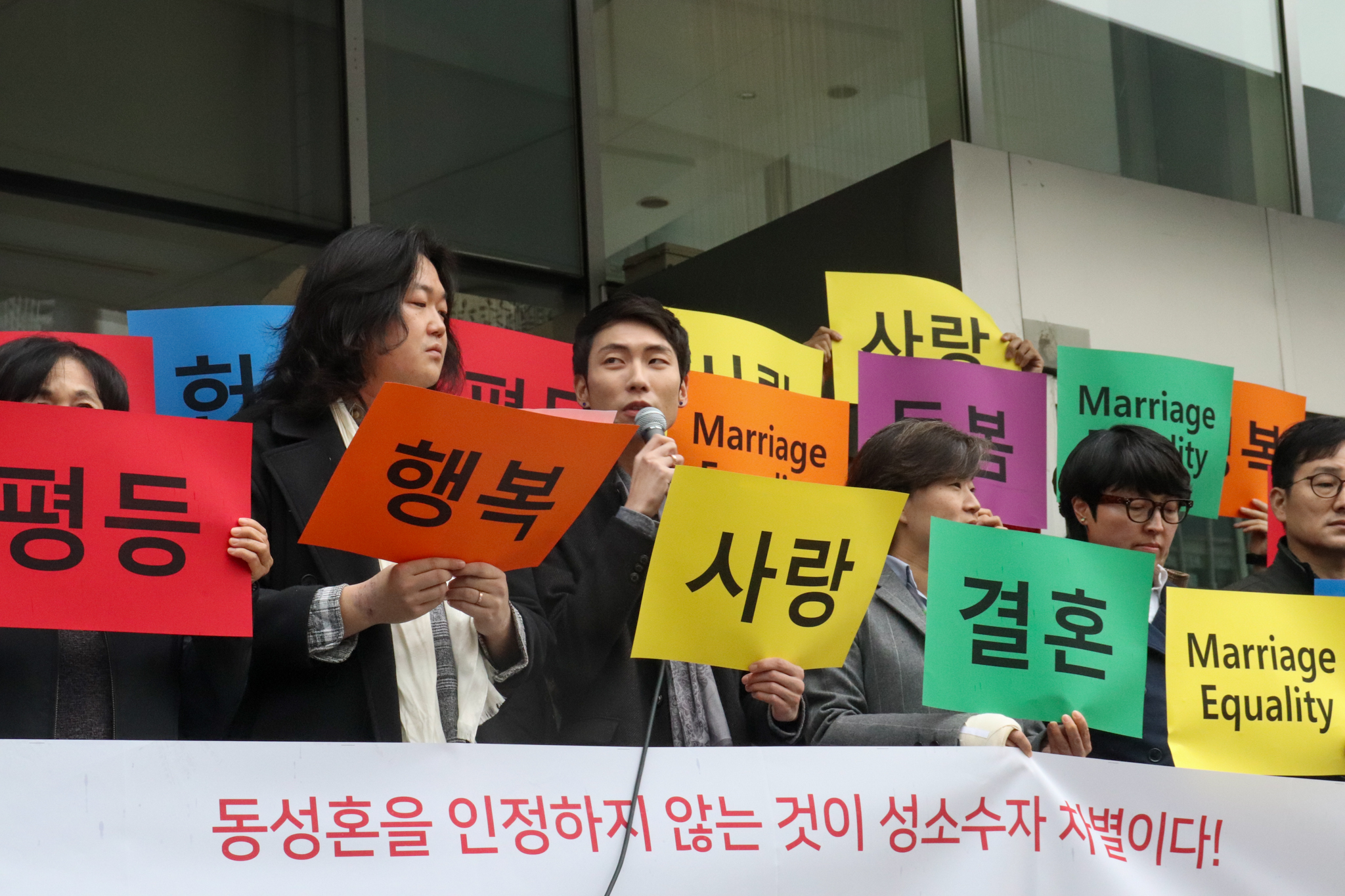 Kim Yong-min and So Sung-Wook, who are a gay couple, said, “I was very sick at one time and I had a hard time leaving my home for two years. If I had not had my husband then, I would not have recovered. My husband bought me water when I couldn’t go outside to buy water and prepared meals when I couldn’t eat. My husband has been by my side for a long time and has cared for me when I am sick. If this kind of relationship is not a family, what kind of relationship is it? Heterosexual couples can get married with just one simple document. Why do we have to prove our relationship here?” They urged the National Human Rights Commission’s prompt recommendation for the protection of same-sex marriage. 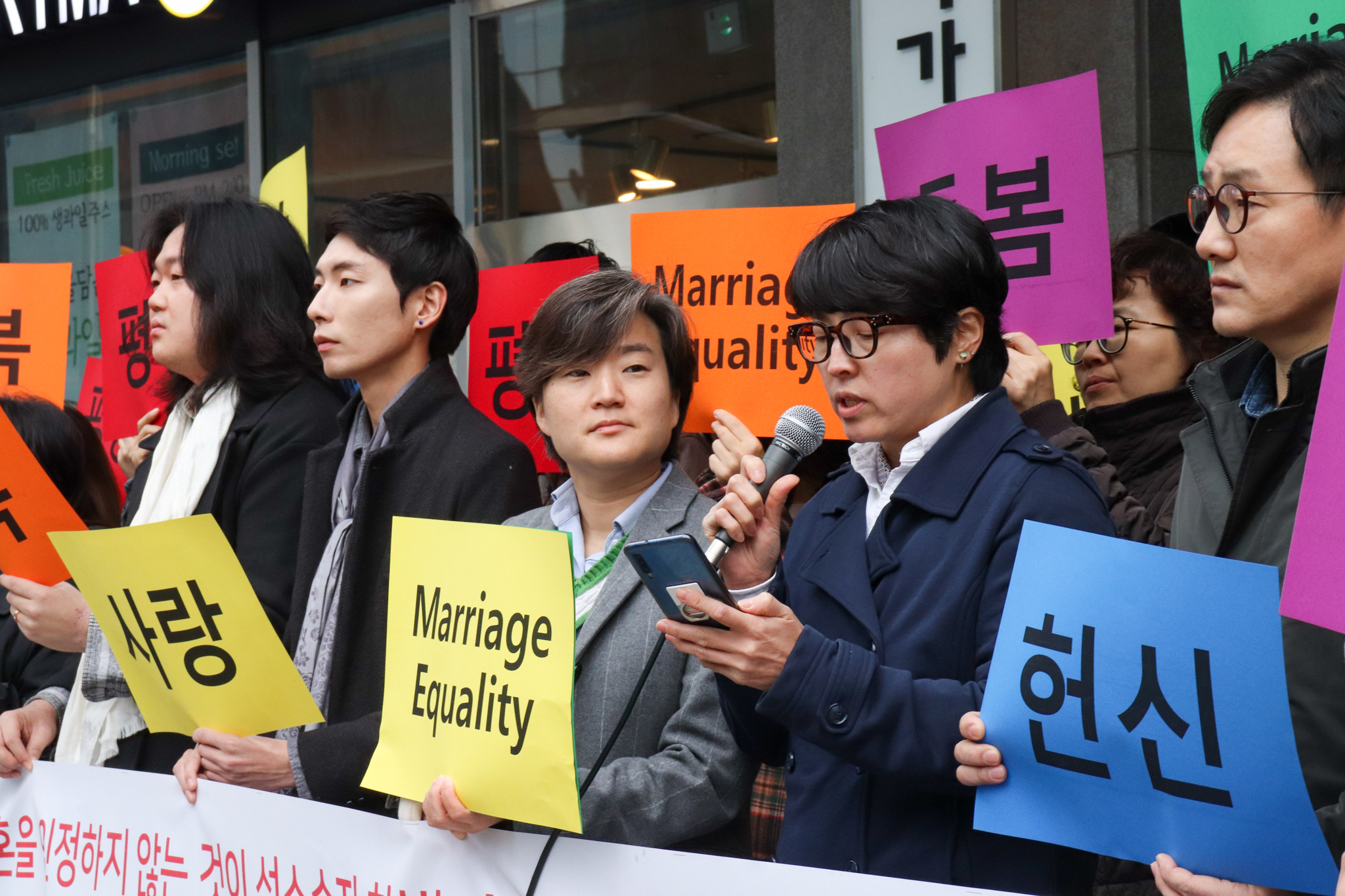 The lesbian couple, Yoon Hwa-young and Chang Suh-Yeon said, “In case of a sudden accident, my partner, who knows me the best and much better than my relatives, has no legal rights as a spouse. Without leaning on my family’s goodwill, I can’t decide anything about me. Heterosexuals can do everything just by registering their marriage. Why can’t we?” they said. 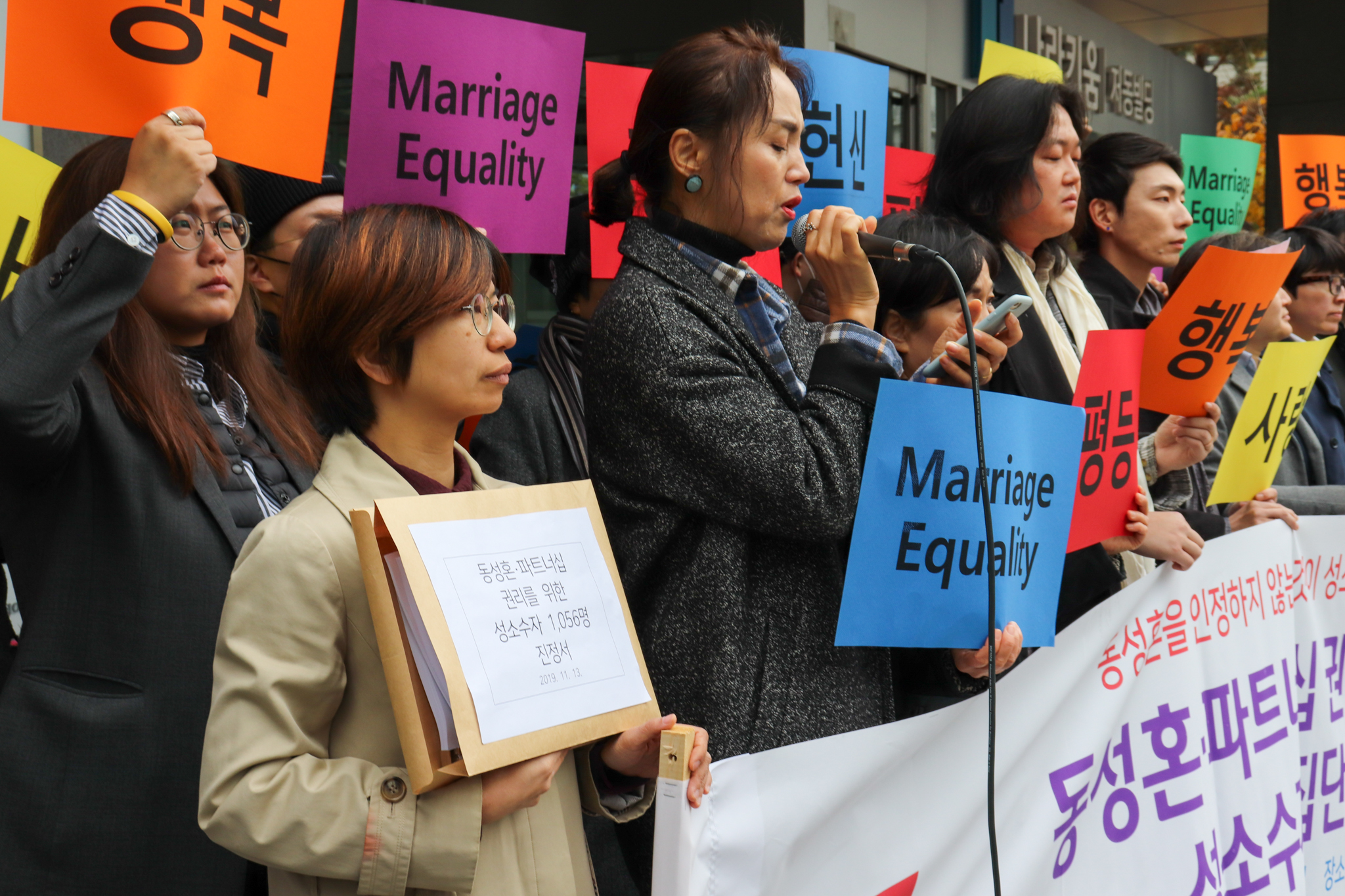 Vivian, from PFLAG Korea, is the mother of a petitioner, who is gay. She called for the National Human Rights Commission’s recommendation, saying that social discrimination (such as the denial of same-sex marriage) is one of the main reasons to disapprove and hate themselves among LGBTQ youth.

1,056 petitioners said they were disappointed that the NHRCK rejected the British-Korean same-sex couple’s complaint in March this year, and sincere and thorough investigation and appropriate relief based on an understanding of the seriousness of current human rights violations and discrimination. 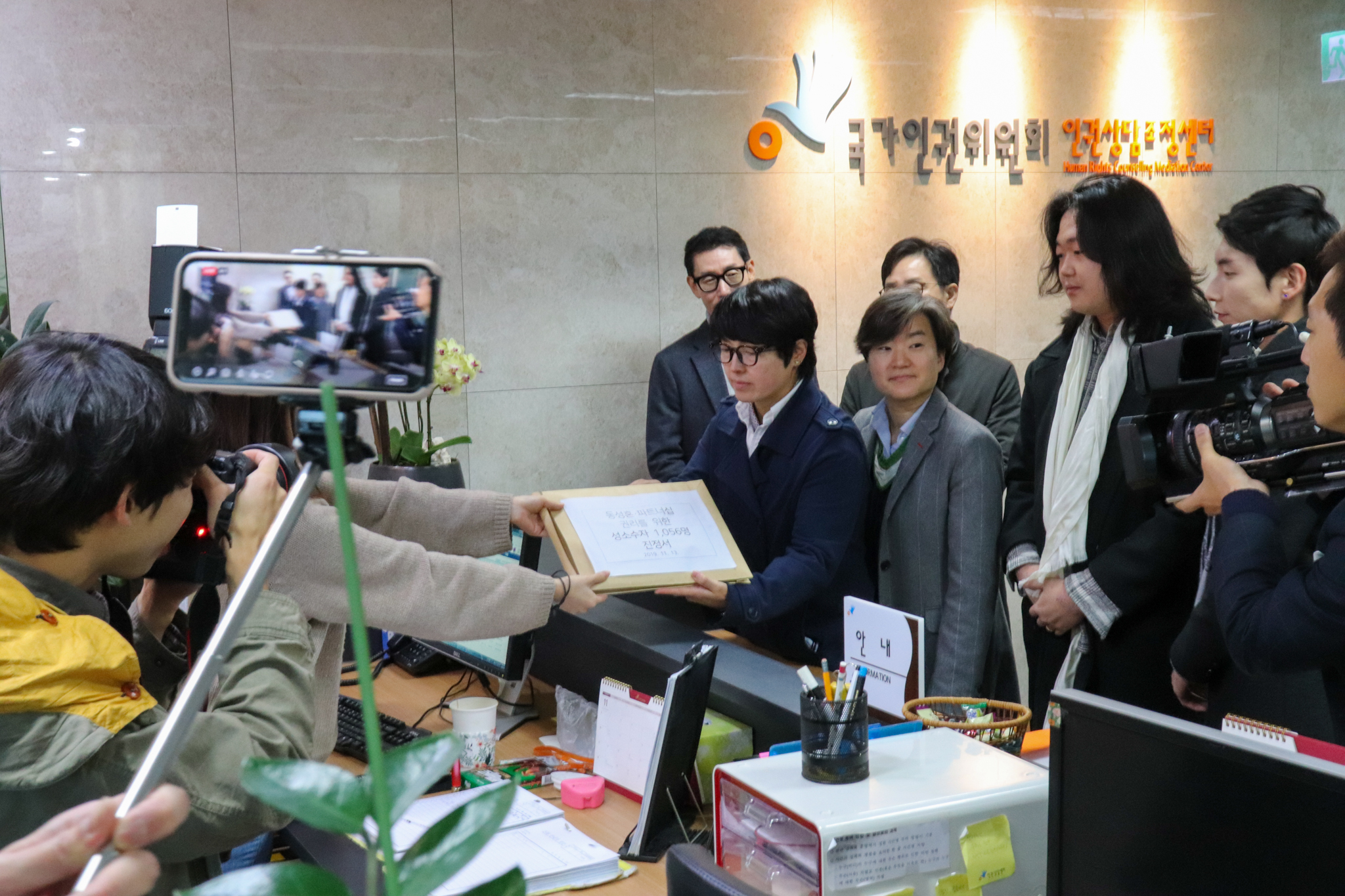